*gogo art projects is pleased to announce Matthew Sutton's The Kudzu Project. For this dynamic installation, Sutton is planting kudzu in the front window of Conner Contemporary Art / *gogo art projects. Kudzu, indigenous to parts of Japan and China, is known throughout the Southern United States for its rampant, invasive and widespread growth. The plant was originally imported to the United States primarily as a government initiative to help control erosion, but it quickly became known as "the vine that ate the south".

Sutton views the use of Kudzu as:

...the parable of a enlightened, well-meaning "solution" foisted upon the poor, prostrate
and disadvantaged. The government for decades offered farmers up to $8 an acre to
plant it--during the New Deal the CCC planted it extensively-- and through disregard
for the complexity of nature (human and social as well as more properly natural) initiated
an environmental catastrophe symptomatic of a much larger human one. The most
callous part of this history wasn't the introduction of the plant from 1890-1940, which
really was a case of good intentions, but was the slowness in reacting to the problem
(1950-1970). By 1950 or so, it was already clear that the plant had become a monster
outside of anyone's control, but legislation to recognize it as a problem and thus take
steps to control it didn't start until the mid-70's.

A vital component of the installations is the subversion of the artist's own hand. Other than the initial conception of the piece and the planting of the vines, the outcome is primarily left to chance. The direction, rate and success with which the plant grows remains left to nature and a tension is thus created between the hand of the artist and the forces of nature. Likewise, a similar situation of chance and a resignation of artistic control is created by the simplicity of the project which is merely a kudzu vine planted in a gallery. As Sutton claims, this "allows viewers to bring to and project onto the plant their own issues-offering the plant as a blank, but nonetheless potentially endlessly meaningful symbol".

The Kudzu Project will be on view until August 1st . *gogo art projects is located at 1730 Connecticut Avenue, NW – 2nd Floor, Washington, DC 20009. 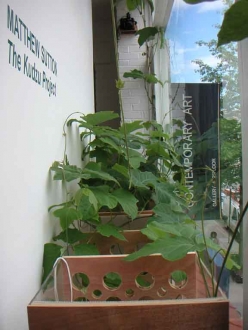 The Washington Post
The Vine Art of Kudzu: Will Its Appeal Grow on Us March 18, 2007
View on washingtonpost.com