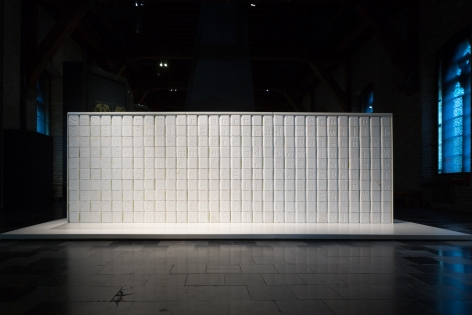 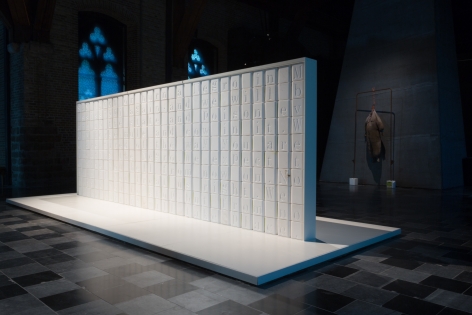 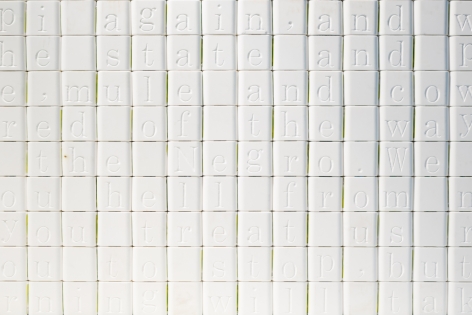 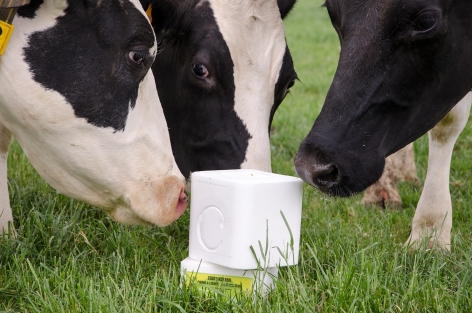 Study for Measures Not Men

CONNERSMITH is pleased to present the work of Wilmer Wilson IV at The Armory Show 2018.

Wilson’s monumental sculpture, Measures Not Men (2017) urgently revisits the lynching of nineteen Black World War I veterans in the rural South upon their return from war. On the centenary of America’s entry into WWI, the artist focuses attention on the anger that motivated acts of lynching by whites in fear of Black servicemen’s elevated social status. Recalling the history of the agricultural landscape as an American site of social terror, Wilson’s sculpture features salt lick blocks carved with two grammatically divergent newspaper versions of a letter delivered to a Mississippi sheriff in 1919. The letter’s anonymous author, “Fire Bill” threatened to "burn the entire state" and "poison every horse, mule and cow" if the lynching of Blacks did not stop.

At intervals during fair hours, Wilson will enact a performance cycle titled FfIiRrEe (2018) in which he and a carver working under his direction will continually carve the letters ‘f’, ‘i’, ‘r’, and ‘e’ into all four sides of successive salt blocks. Using these four letters, the artist will produce a dynamic range of textual utterances clustered as totemic or rubble-like forms. Within the contexts of the historical circumstances of Fire Bill’s letter and social injustices that continue into the current day, the word FIRE may be understood as a command to enact violence, a calculated release of energy, or an urgent alert to ourselves and those around us. As Platform 2018 curator, Jen Mergel, observes: “Wilson’s cutting gestures revive the complex power of editing (and editorializing) to incite violence—or resistance.”